Another recent trend on Facebook is the “Top 5” Lists, on everything from Favorite Wrestlers to Jobs. Here are a bunch of Top 5 and Top 10 Lists for me.

There are a lot of places in the United States that I would love to visit, even if it’s only for a day. The Top 5 Cities That I Want To Visit For The First Time:

5 Vehicles That I Always Wanted To Own:

I’ve watched pro wrestling for as long as I can remember. I grew up with (then-WWF) Superstars and the Memphis-based CWA (later, USWA). Add in WWE, Ring of Honor, NWA/WCW, the original ECW (not that WWE abomination), TNA/Impact, and some New Japan Pro Wrestling, Chikara, and Indie promotions, and you have a big portfolio of fandom.

It was difficult to choose my favorites wrestlers but here are my Top 10 Favorite Wrestlers:

3. Spanish IV – not only the subject but the friends in that class were awesome! 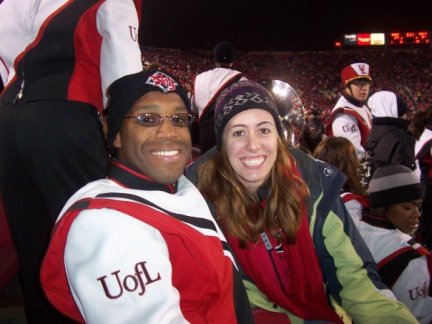 5 Favorite Marching Band/Drum & Bugle Corps Shows That I Was A Part Of:

5. “A Day At The Derby”: 2009 Derby City Knights (DCK) Brass Ensemble. We dress as various parts of the Kentucky Derby: infield watchers, Bugler, UofL Band Member, member of Millionaire’s Row, and jockeys, to name a few. A stand-still show, we finished 3rd at the 2009 DCA World Championships.

3. “Cats”: 1994 Ballard High School. I still think that we could have made a huge run at a State Title, but some logistics sunk our chances.

2. “Superhero Show”: 2006 UofL. This was a fun show that the audience really got behind.

1. “Fantasía Española”: 2007 Derby City Knights Mini-Corps. Before we were a Brass Ensemble, we were a larger Mini-Corps. 2007 was our first show: “El Camino Real”, “One More Time Chuck Corea”, and “Malaguena”. The reactions that we got during “Malaguena” are something I won’t forget for a long time.

1. Lima Beans – I might fight everyone if Lima Beans are involved. Same with Beets.

10 Video Games That I Want To Play NOW!:

I plan on getting a new PC within the next week or so; PC is my main gaming weapon of choice, but I will play console games when I get the chance. After watching most of the recent E3 coverage – check out “Podicus Wrecks”‘s coverage and review of it, later in the week – this list has changed since the original draft.

10. Overwatch (PC) – the only reason I haven’t played it is b/c my current PC probably wouldn’t like it

8. The Witcher (PC); the whole series, to be honest

7. Trials Rising (PC, PS4) – this was announced at E3; it’s a stunt driving game that seems to reward you for spectacular crashes. Right up my alley!

5. Atlas Reactor (PC) – the current PC doesn’t have the graphics to play this; the new PC should.

1. Legend of Zelda: Breath of the Wild (Switch) – this game looks SO GOOD!

My love for college basketball goes back to the mid-1980s, and at the top of the fandom mountain is University of Louisville Basketball (although Purdue University is a close 2nd). I’ve watched hundreds of games on TV, listened to thousands of games on the radio, and have played at/seen dozens of games live as a member of UofL’s Pep Band. It took a while but I did manage to pick out my favorite games.*

*list subject to change, as I remember other games

10. vs. Illinois (2005 NCAA Final Four). UofL went to St. Louis for the Final 4, most (if not all) of us going to our first one. The week leading up to it was awesome! The game itself was close for the 1st half, then Illinois pulled away in the end. Our Pep Band even got some compliments from both Michigan State and Illinois’ Band Directors. Despite the loss, it was still fun!

8. vs. Syracuse (2010). Historic Freedom Hall closed at the end of the 2010 season, and Syracuse was the final home game. #1 ranked Syracuse. I was at home, just a couple of days after my major heart surgery. Louisville absolutely lit up Syracuse, closing out Freedom Hall in style. I didn’t have an adrenaline heart attack, either. 😉

7. vs. Cincinnati (2002 CUSA Tournament). Cincinnati was Louisville’s biggest non-UK rival. The tournament was held in Cincinnati. The game was close the entire way. Near the end, Cincy took the lead by 2 on a very questionable call; there was TV timeout, afterwards. This led to one of the loudest moments I have ever heard: UofL fans, egged on by us (Pep Band), Cheerleaders, and the Student Section, got insanely loud… only to be absolutely drowned out by Cincy’s fans, band, and Cheerleaders. My ears actually were ringing by the time play resumed. We lost 64-62 (I think) but that was an absolutely fun ending to a game, evet with the loss.

The above picture wasn’t the final score.

UofL fouled Memphis – playing on their own court, needing to win to make the NCAA Tournament – with no time on the clock. Darius Washington (pictured), taunting and trash-talking almost the entire game, went to the free throw line, shooting 3 Free Throws, flexing along the way.

He missed the second one.

Don’t yap and taunt until you have the game wrapped up.

4. vs. Washington (2005 NCAA Sweet 16). Washington was the #1 seed in that region; UofL was #4. UofL smothered Washington, on their way to the Final Four. I was hoarse at the end of this game; for someone who wasn’t the loudest or biggest yeller, that was something.

UofL was in a rebuilding phase in 2001, with new coach Rick Pitino. They played a then-solid Tennessee team at Freedom Hall. UofL was behind by 6, with the ball, with 36 seconds left. UofL hits a 3 (down by 3), stole the ball, and hit another 3 (tie game). Tennessee killed about 15 seconds, then hit a shot, with 8 seconds left. The guy that hit the shot celebrated the whole way down the court. UofL hits a 3, with 2 seconds left, to win! An awesome game during my Freshman year!

1. vs. Michigan (2013 NCAA National Championship). Screw the NCAA for taking that title away. Screw Rick Pitino for having scandal after scandal on his watch. Double-screw Andre McGee and Katina Powell for causing all of the problems to begin with. What you shouldn’t screw: the game itself, which was a magnificent game between Louisville and Michigan; the time with college friends that I hadn’t seen much of (before, and after); the celebration immediately after the game. Unless the 2018-2019 team wins the National Championship, the 2013 Championship game is going to be hard to top.