Our Game Night host, Scotty, backed this game on Kickstarter; we got our first test run through it this past Friday.

Rayguns and Rocketships takes you deep into the universe, where groups seek out adventure, search for riches, or strive to dominate other planets and life-forms. Each group and race have different powers that they can bring to bear in their battle for supremacy!

There are 4 alien races and groups that each player can choose to play as (if you backed the Kickstater, however, you got the choice of extra Mercenary Captains). Each group has a Ship and Ship Card, 6 Planeteers, a Captain and Captain Card (with unique abilities), and small decks of Movement Cards (for your Ship) and Star Cards (to give you that extra “oomph!” against your enemies). For example, I chose the very alien Blaarg:

Your Ship has a corresponding Ship Card. Each Ship Card includes areas for Ray Guns, Engines/Boosters, Escape Hatches, Air Locks, a Captain’s Chair, and Control Panel. Each Ship also has a different layout: the Blaarg’s Engines won’t be in the same places as the Astro-Rangers, for example. This layout will come into play with Planeteer placements, explained later.

See how the Ship miniature has a 90 degree notch cut out of its base? That is for movement along the lines of the Game Board.

The Ship’s notch lines up with this grid. Movement cards allow you to turn 45 degrees in different directions, letting your ship move diagonally. Be careful, though – you can move off of the board… and that will cause some serious damage to your ship.

Each player gets 6 Planeteers and a Captain (with unique abilities). They can move around your Ship or on the Game Board, outside the ship. Each Planeteer can also occupy spaces relating to the different Ship parts, with varying effects:

There are 3 Phases to the game: Rocketship Movement, Rocketship Combat, and Crew Movement and Combat. They are explained below.

Movement Cards orient your Ship to the left or right, and move your Ship at least 1 space forward. Star Cards give you abilities, such as “make an opponent re-roll their last dice roll”. These come in handy!

You can attack with Ray Guns on your Ships (vs. other Ships), via ranged shots or melee, with your Planeteers (on other Planeteers), with your own Ship, via Ramming (vs other ships; see “Dice and Cards”, Melee Attacks, for rolling rules) or with your Captain (vs. other Planeteers and Captains). With the Ships, you can attack in a 90 degree area, with whatever Ray Gun(s) is (are) facing opposing Ships. Some ships have 2 or more guns facing in a particular direction; the Blaarg can shoot anyone in a 360 degree area, if they are in range. That range, for all ships, is 2 spaces away (if your Ray Guns don’t have a Planeteer on them) or 3 spaces away (if they are manned), unless you have a card that changes that. For the Planeteers, it’s 1 space for melee, 2 for ranged attacks.

Speaking of the Planeteers: if someone is manning the Control Panel of your ship, you can leave via the Air Lock; if it’s unmanned, it takes an Action Token to leave. Planeteer combat can take place in space or on an enemy’s Ship.

For example: the Blaarg (green) and the Zard (purple) are outside of the Zard’s ship. I (Blaarg) tried to board Evan’s ship but his dice roll beat mine, so no board for me.

Sets of d8 dice determine how your combat progresses. A die, colored like your Planeteers, is rolled for melee and ranged attacks; if the defender rolls higher, they dodge the attack. If, in melee attacks, you roll an equal number, that attack is ‘riposted’: the defender becomes the attacker, the attacker becomes the defender! This repeats until there is a clear winner in the dice rolls.

That colored die, plus up to 3 black d8 dice, are rolled for the Ship attacks; you have to tell which colored dice are for manned attacks. More importantly. you have to specify what areas of the opposing Ship you are attacking: the Guns, the Engine, the Ship body, etc. A Ship part is Damaged (or removed) after a successful attack; 8 Damages to a Ship equals a destroyed Ship… and 3 Victory Points to the attacker.

Victory is earned via Victory Points (from 10 to 25, depending on the number of players) or through the completion of Scenarios. 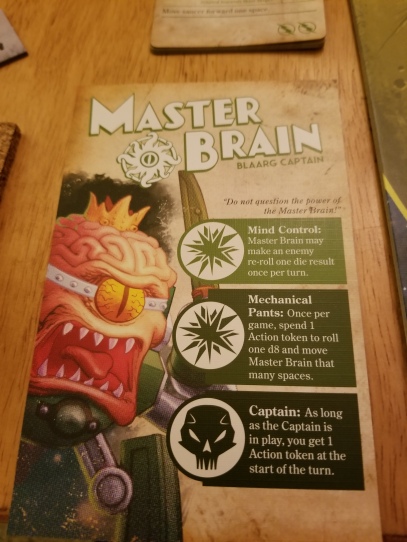 4 of us – myself (“Blaarg”), Scotty (“Space Pirates”), Evan (“Zards”), and J.R. (“Astro-Rangers”) played to 25 Victory Points. The above is my Blaarg Captain Card. The below is what happened when one of Evan’s Zard Planeteers tried to board my Ship.

I had to leave early; when I left, I had 3 Planeteers and my Captain left, plus 1 Damage to my Ship (not counting one of my Ray Guns being destroyed). J.R. ultimately won, destroying Evan’s ship and outlasting Scotty.

This is a very fun, action-filled game… once you get used to all of the things to remember; no cheat cards or reminders came with the game. That said, I like the movement mechanics, the varieties of each group/race, and the combat system. The miniatures are pretty sweet, too. I need to play a full game to get a more complete feel, but I really liked what I did manage to play!

One thought on “Review: “Rayguns and Rocketships””