I got the chance to play about 30 minutes of Super Mario Odyssey on Saturday evening. I now want to own this game, if for the sole reason of getting revenge on Bullet Bills.

There was much that I enjoyed about my introduction to Super Mario Odyssey, starting with the game’s actual intro. “High Above Peach’s Castle”, you witness the latest battle between Mario and an unusually-dapper-dressed Bowser on an airship. (His tuxedo is sharp – I want one!)

Bowser puts a pretty quick, pretty decisive beatdown on Mario, kicking Mario into parts unknown. After Bowser gives his deposition – which I’ll save for you to discover, although it’s probably not hard to guess what it is – he flies away.

Mario is then seen, laying face down in dark-gray, wet sand, in the below area:

He is prodded awake by… a floating top hat? Okaaaaay. This hat, called Cappy, tells how Bowser came through his town (“Tophat Land”) and did a similar beatdown to the town that he did to Mario earlier. Cappy offers a partnership: he’ll help you if you help him find his sister. You agree, and Super Mario Odyssey’s Tutorial Section begins.

See that tall building, with the giant hat on it? That’s where I had to go. On the way, Cappy and I got to know each other better, while denizens of the town – floating Tophats – give a little more info on what happened to their town. One of the unique features of this game is the use of Cappy. Cappy can be thrown at enemies in a variety of ways; your early skill is to straight toss Cappy at enemies pr objects, via the ‘Y’ button or by shaking the JoyCons. You can also toss Cappy onto different persons, enemies, and animals, giving you some very “interesting” new features. For example: a Cappy toss at a frog treats you to a trippy cutscene, followed by Mario waking up in the body of the frog! Froggio (MY TRADEMARK!) can now jump much higher than he could as normal Mario (don’t worry – you can leave inhabited bodies via the ‘Y’ key).

There are coins, coin blocks, and all kinds of hidden and not-hidden items to collect, break open, and check out. Once you leave the Tutorial, do not hesitate to explore.

Back in Tophat Land, you finally reach the giant building, spiral up to the top, and have your first Boss encounter: Mr. Green-Hat-Rabbit, one of 4 henchman, sent by Bowser, to slow down and/or stop Mario: 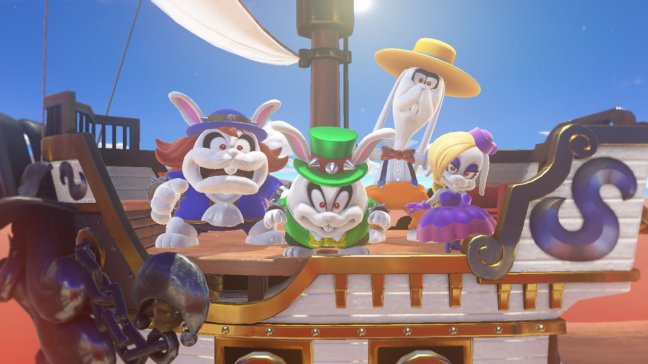 Use your Cappy-throwing ability to stun him, bounce on his head a few times (watch out for large, spinning, spiked Green hats on the ground!), and you earn your first Boss victory! On to the rest of the gigantic game!

You have a conversation with Cappy as you reach your first non-Tutorial stop: Cascade Land. You and Cappy find a spaceship but it’s out of power. You have to find 5 items called Banana Power to fill the ship’s energy gauge. You now are set: you have an objective to start, a land to explore, and Cappy to help. There are friendly and not-so-friendly creatures in this land (including CHOMPS!!); there are new Cappy techniques that you learn, via signposts; there are Checkpoints; and there are some very cool, hidden areas and events that I won’t spoil for you – you have to explore the land and find them. Oh, Blue-Coat-Rabbit and her “pet” are waiting for you at the end of this land! Have fun!

I do not own a Switch; this brief playing was done at the house of “Comicdom Wrecks” writer and “Podicus Wrecks” co-host, J.R.. If the rest of the game is anything like the Tutorial and Cascade Land, this will be an amazing game! The controls seem fine; they were a little awkward for me, because I’m not used to JoyCons yet. Cascade Land had plenty to offer and discover… and I’m pretty sure that I missed some items and areas. I like the use of Cappy as a combination “boomerang”, “guided missile”, and “power conduit”: in addition to throwing Cappy, you also can gain different varieties of Runs, Jumps, Ground Pounds, and Rolls. I do not know just how many are available throughout the game but you’ll have plenty learned by the time you leave Cascade Land.

The Open World is something that’s always appealed to me: “your mission is to get HERE, but you can go ANYWHERE to get to that mission objective”. It adds a lot of play-ability to the game.

If you own a Switch, Super Mario Odyssey should be added to your library in the very near future. It was a fun beginning, with a LOT of game still to go. I’m looking forward to seeing what else this game offers!