“Podicus Wrecks” host, J.R., along with “Comicdom Wrecks” co-conspirators Jacob and Casey, and myself, talked about the upcoming WWE pay-per-view event, Summerslam, on the latest episode of “Podicus Wrecks” (it should be available for listening by tomorrow night). But the WWE has an event the day before Summerslam: “NXT Takeover:  Brooklyn”, this Saturday. “Takeover: Brooklyn” has not only become the biggest event for the NXT developmental territory, but it has arguably been one of the 2 or 3 the best overall pay-per-views of the year, for any of the 3 WWE Brands (Raw, Smackdown, NXT).

After the destruction of the #DIY tag team and time off for an injury, Gargano is back as a singles’ competitor, looking to reclaim his “Mr. Wrestling” nickname. Andrade – or Almas – or Cien – or all 3 – came into NXT with a considerable amount of hype. He has lived up to about 15% of said hype. However, he has a new, more focused persona, and a manager/valet/ sense-slapper-into-person in Zelina Vega. This might be the perfect spot for Almas: a big win over Gargano, on a PPV.

Predictions: Almas wins, via help from Tommaso Ciampa. Ciampa, out for the year, will either appear on the screen or the ramp, distracting Gargano enough for Almas to take advantage.

Although I haven’t seen him much lately, I do like the ‘new’ Itami: frustrated, ruthless, and a bit of a jerk. Alestair Black may have one of my favorite gimmicks going in NXT: an almost Dark Cultist-like figure, kind of what I picture Christopher Daniels being, if he had jumped to the WWE about 15 years ago. This match might be won by the competitor that reaches 20 successful kicks to their opponent first, as both of them have some pretty wicked kicks in their arsenal. I think Black might have just a little more in his tank than Itami.

Match of the Night candidate.

Asuka’s name is next to some of the most impressive stats in WWE History: she is the longest reigning NXT Champion, regardless of gender (503 days); she is the oldest NXT Women’s Champion (34); as of today, she has the 2nd longest women’s title reign in WWE history (passed Rockin’ Robin’s 502-day reign in the late 1980s); and she is now the longest reigning WWE Champion since Hulk Hogan’s 4–year reign from 1984-1988. That’s a lot for Ember Moon to overcome. And she might be the last really good chance for NXT’s Women’s Division to unseat Asuka. Moon definitely has the athleticism, speed, and move set to do it. Asuka, on the other hand, has the experience, striking ability (ask Nia Jaxx), the ability to withstand ridiculous amounts of punishment… and she has Champion’s Advantage. There is something in the air, however…. the upcoming Total Solar Eclipse, on Monday in the United States, is a sign of the Changing of the NXT Guard. Asuka’s reign ends at 506 days.

It’s been a while since I’ve seen two hoss tag teams – heel tag teams – butt heads over Tag Team Titles. Maybe The Brothers of Destruction (more Neutral than Heel) vs. Rikishi and Haku? Anyway, don’t expect a ton of scientific prowess in this match. This will be 10 minutes of the ultimate Ground-N-Pound game. And it should be very entertaining. 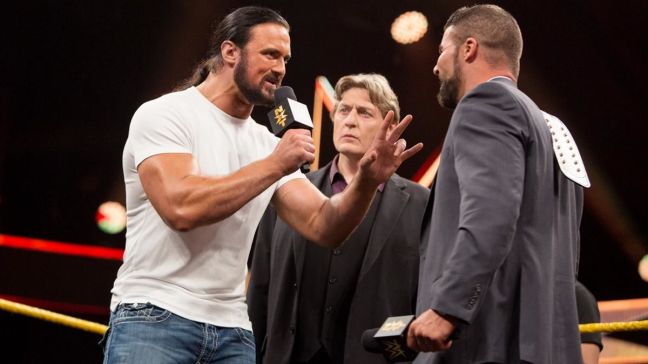 Match of the Night candidate.

First question: how flamboyant will Roode’s entrance be?

Next question: will Roderick Strong get involved?

I had a hard time picking a winner for this match. Roode and McIntyre are pretty evenly matched. Roode has already proven that he can carry NXT as their champion; I’m pretty certain that McIntyre, if/when given the chance, could carry NXT, also. But the wild card to this match is Strong. The personal nature between Roode and Strong’s feud may spill over into this match… possibly costing someone the NXT Title.

Predictions: Bobby Roode wins the match, via DQ. Strong will get goaded into attacking Roode, costing McIntyre the Title. This will lead to a 3-way brawl and probably a Triple Threat Title match in the next 1-2 months.