‘First Impression’ posts deal with my thoughts and reactions to games after I’ve played through the Introduction or Tutorial stages, and perhaps made it to a major checkpoint.

Pillars of Eternity is an RPG that takes place on the world of Eora, where strange things are afoot.

**Warning: Slight Plot Spoilers Are Ahead!!**

**Warning: Slight Plot Spoilers Are Ahead!!**

YOU HAVE BEEN WARNED!!

Pillars begins like most CRPGs: a scroll of text, saying: “You are traveling [along a road/to a village, etc.] when you stop/are stopped.” Before the prologue continues, you are taken to the Creation screens; this was a little different than the standard quo. 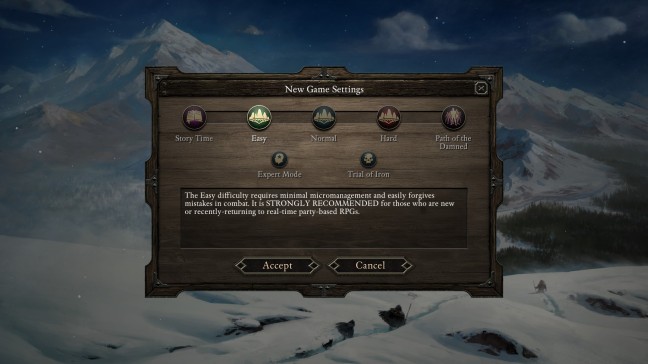 The first screen is the Game Mode Settings. There are 7 possible modes, from ‘Easy’ (where the game makes the mechanics of managing fights much more forgiving) to ‘Trial of Iron’ (where you only have 1 SAVE FILE – if you die, that file is deleted and you start over). I love that there are more choices than ‘Easy’, ‘Medium’, and ‘Hard’. On this ‘test’ play, I picked ‘Normal’ – base rules, some forgiveness of ‘mistakes’ in fights (I’m not entirely sure what that is), and plenty of Save File availability.

The next screen lets you pick your character’s Race. There are 6 available races: Humans, Amurua (larger than Humans), Dwarves, Elves (my pick), Orlan (looks like a cross between a Halfling and a bush), and Godlike (Humanoids that were touched by some kind of Celestial/Infernal being). 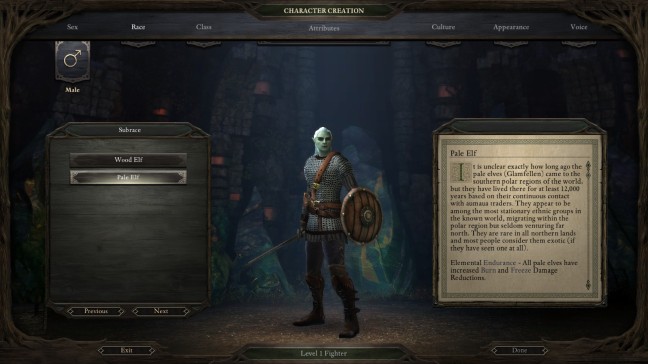 Each race offers 2-4 sub-races, with varying powers and features. I went with the Pale Elf. The ‘flavor text’ for each race and sub-race is in an easy-to-read box, off to the side of the screen. 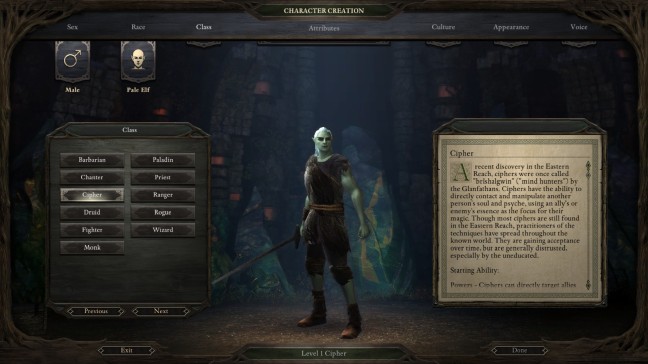 There are 11 classes available, with descriptions of each class in its own ‘flavor text’ box. Two classes are of particular interest: the Chanter seems like a Bard with more Fighter training, while the Cypher is based on big Psychic attacks, powered by physical attacks and a ‘Soul Whip’. My choice was the Cypher. 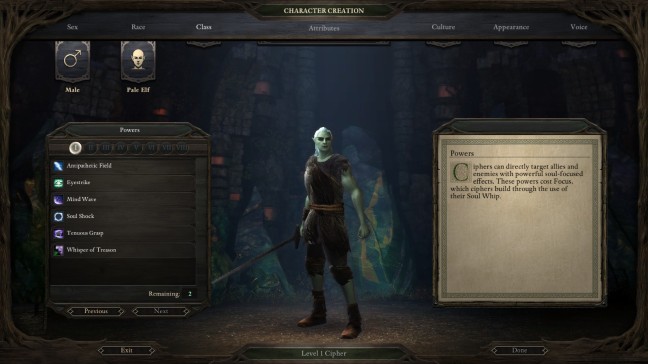 The Cypher, along with some of the other spellcasting classes, let you choose a few spells to start with.

Your character starts with base values in 6 attributes – Might, Constitution, Dexterity, Perception, Intellect, and Resolve – with 15 additional points to distribute. This was an interesting change: usually, Wisdom and Charisma are attributes, instead of Perception and Resolve. The game makes it easier to choose which attributes to add some of those 15 points to by putting a gold star by the attribute that your class needs the most, followed by silver stars next to 1 or 2 others that you class should have a high value in. For example: Intellect has a gold star for Cyphers, so I put 8 points there (maxing out the starting value); Might and Dexterity have silver stars, so I put 3 points in Might and 2 in Dexterity. With 2 points left, I put 1 in Constitution (so I can have a few more hit points) and the other in Perception. The final stats are below:

Culture is a new (to me) category for CRPGs. Your character can choose one of 7 different areas as an origin or birthplace. Each area will give you a boost to an Attribute. I picked “Old Valla” for +1 to my Intellect. 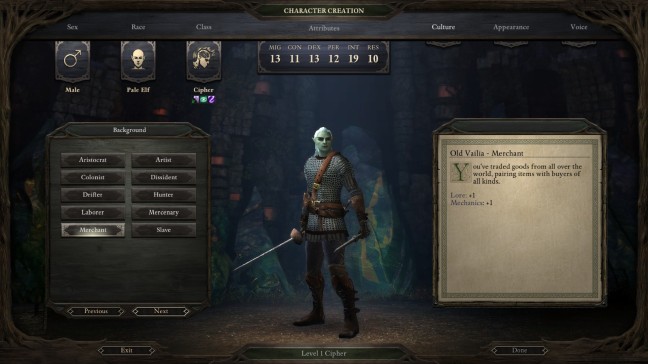 Your background is your “job”, pre-game. Each job has a small description about it, and boosts a secondary stat. The Merchant, for example, gives +1 to your Lore (knowing info about spells, items, and local customs, for example) and Mechanics (opening locked doors, disabling traps, and fixing items, etc.) stats. Combined with your Race, Class, and Culture, you can fill out a pretty interesting bio for your character.

You can flesh out your character by picking clothing and armor colors, physical features, and voices (for when your character is selected, battle sounds, and some movement sounds).

You have a final screen to make any changes you want, then you are ready to go!

You are at a campsite, following the incidents described in the Prologue audio file. Caravan Master Odema doesn’t like the feeling of the area, and certainly doesn’t like how you look (you are ill), so he sends you on your first quest:

Where Pillars differs from a lot of CRPGs is that the dialogue has a big effect on your character and how everyone will react to you (“Reputation”). You are given a lot of dialogue choices, but some might be unlocked, due to a missing or lacking skill. In the early goings, there aren’t too many choices that will drastically change your Reputation… but keep it in mind. 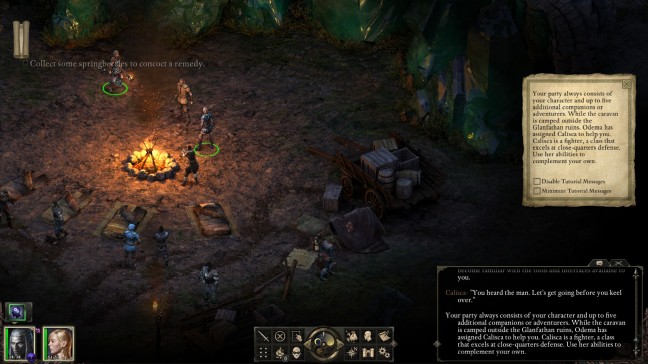 Your dialogue box is adjustable and off to the side, in the right-hand corner. Help boxes usually appear in the top-right corner; read these carefully. A lot of helpful info will be there.

You know have a party to control and a couple of easy quests to finish: find those berries and find some water. Explore as much of the map as possible. As you look for the berries and water, Help Boxes will pop up, with info on game controls, party movement, and other helpful tidbits.

Once you find the items, head back to camp. On your way, you’ll find your missing colleague, on the verge of death. You’ll also find your first set of enemies. Dispatch them, arrive at camp, and you get your first cut-scene and a bigger (possible) fight. Dialogue choices will matter here.

I will not reveal the outcomes because there are a lot of them. 😉

I really liked this intro, from the opening camp fire to “emerging on the other side”. The controls are pretty easy to use (and set to your liking, if you don’t like the defaults). The diversity of available races, character stats, and classes was nice. The graphics are awesome but the dialogue is even better! The fights took a little bit of getting used to but it wasn’t a big issue. All in all, Pillars of Eternity seems like it will get plenty of hours of play-time from me!