‘Tis the season to be frightened,

If there’s one “Halloween” song that is guaranteed to make my playlist, it is this one:

– I’m starting to FINALLY feel in the Halloween mood! I think what delayed this mood was the weather: it’s been flirting with 90 degrees, every day, since the end of September; by the end of the week, we may not get out of the 50s. To celebrate, I have a post in the works of my Favorite Horror Movies. These aren’t the best Horror movies I’ve seen, just the ones I like the most. Stay tuned for that! As a teaser, this movie ended up on the list:

– Speaking of scary, it’s scary just how bad the University of Louisville football team has looked this season. As of the writing of this post, they are 2-4 on the season, with blowout losses to 2 of the weakest teams in the ACC (Virginia and Georgia Tech). I understand that teams can be young or inexperienced, and I understand that most teams will have a bad year every now and then. What I don’t understand is how a team doesn’t look like they belong on the same field as their opponent: wide-open missed tackles, players lining up in the wrong formations…. Louisville has been awful. Thankfully, they still have 6 games left to turn around the season. I still have faith in the team; not much, but it’s still there.

– I was gifted a copy of World of Warcraft’s newest expansion, “Battle for Azeroth” – thanks, Paula!! So far, I’ve enjoyed it. Playing on the Alliance side (with ‘War Mode’ OFF), there has been a lot of ‘spooky’ floating around: haunted forests, the possibility of possession, and, in the area a couple of my toons are questing, witchcraft. But one of the eeriest, creepy characters I have ever interacted with on WoW is a little girl quest giver named Abby Lewis. You’ll run into her in a small village, on the edges of a dark, menacing forest. I will not spoil what she wants, what she says, and how that quest chain goes; all that I’ll say is that I should have murderized her after Quest #1.

– For many years, me, my younger brother, and my sister would listen to Coast to Coast AM‘s “Ghost to Ghost AM” episode on Halloween. It was originally a 4-hour show where Art Bell/George Noory and their callers would tell… ghost stories, whether they were stories that were told to them or stories that happened to them, such as “strange noises in what should have been an empty house” or “I saw my best friend in my front yard – he died 10 years ago”. The last few years, with all of us working different schedules, we would listen live (if possible) and text back-and-forth, or I would record it and send it to them the next morning. I’m looking forward to this year’s episode… but I seriously hope that it is overall better than the last 2 years. Both of those had a few good stories sprinkled amidst a lot of mediocre ones.

– I’m hoping that I can get my planned Halloween costume together by the 20th. A lot of money paid to tuition, medicine and checkups (because my previous health Insurance was cancelled – my income increased, DQ’ing me from that insurance), and a couple of bills pushed the purchasing of the costume back a few weeks.

– Speaking of tuition, the first half of the semester has gone surprisingly well! I have a 75% in both classes:

Hopefully I can recharge this Fall break weekend and get a great start to the 2nd half of the semester!

So, the Ablation from a few months ago worked and there wasn’t a relapse! I still have to get my INR checked on the 18th but that’s a routine procedure. The 227.2 weight is pretty cool – I hit my first goal of getting under 230 pounds by April 1st and am pretty close to a secondary goal of 215 pounds by Halloween.

– And finally, after the results of that check up, I got the O.K. from my cardiologist to try out for a Drum & Bugle Corps if I wanted to. 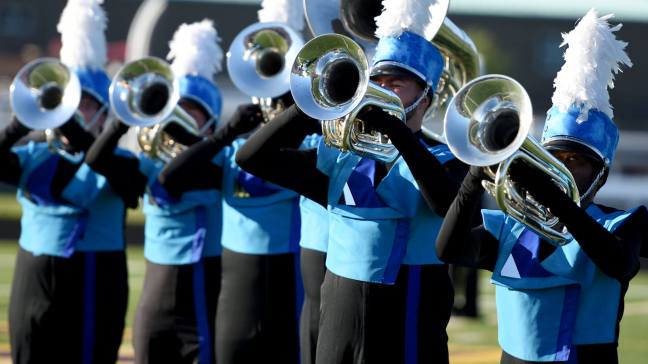 I will do that on Sunday, November 19th, when I travel to Silverton, Ohio and try out for the Cincinnati Tradition. From a purely logistical stand point, Cincinnati may work out better than Minnesota. For starters, it’s about a 2-3 hour bus trip (counting travel time from Cincinnati to Silverton), against a 14-16 hour, multiple-bus trip to Minneapolis. Their weekend rehearsal schedule in the Winter would allow me to attend rehearsal and not miss work time, where as MBI’s rehearsals would mean me missing the following Mondays and possibly part of Tuesdays. Hopefully, I’ve learned from my mistakes from 2013 and MBI (planning, money, work-rehearsal balance) and, if I make it, can march the entire season. Wish me luck!