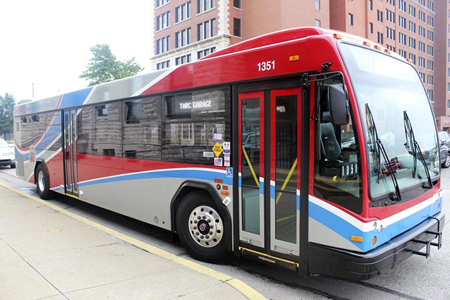 This was probably one of the incidents on Louisville’s public transportation buses that gave me the idea to start writing down the good, bad, sweet, silly, and any other kind of incidents that happen on my travels.

July 9th, 2012 – it was about 5:30 AM. I was about 3 months into living with my Dad in the Portland neighborhood and about 6 months from leaving my job at Target. I was splitting time, working on 3 of the “Early Morning” teams – Price Changes, Instocks (basically a roving Inventory team), and Backroom, with start times between 6:15 and 7:00 AM – so I had to catch my first bus as early as 5:10 AM.

I was on the #43 – a bus that ran northeast to southwest; from Portland, through Downtown (where I got off), Shelby Park, and Germantown, to the Louisville Zoo, GE, and/or Newburg. The bus was a few blocks from Downtown; I was sitting by the back exit door. There was a young dude, maybe in his late 20s to early 30s, a couple of seats in front of me. A couple got on at 18th Street. They were arguing: she was telling him to be quiet, he was yelling about this and that. Both were drunk; he was borderline trashed.

She started yelling to the driver to “get him away from me”. He actually stopped yelling in general and, for some reason still a mystery to me, 6 years later, started mouthing off at the Young Dude. The woman was now in the back of the bus, behind me. Drunk Dude started yelling at Young Dude and pushed him; Young Dude pulled a knife on him. Drunk Dude then started taunting Young Dude, daring him to “do something without the knife” and pushed him again. Young Dude put the knife away, pushed Drunk Dude against one of the support poles, and calmly but forcefully punched Drunk Dude about 6-7 times in his face. The bus driver had finally pulled over at this point and opened the back door. Young Dude, after decorating Drunk Dude’s face, then threw Drunk Dude off of the bus. The woman got off the bus, too (I’m not sure exactly why). Some of the other people on the bus applauded Young Dude – apparently, Drunk Dude had been threatening the woman, Young Dude, and one or 2 others, when he got on.