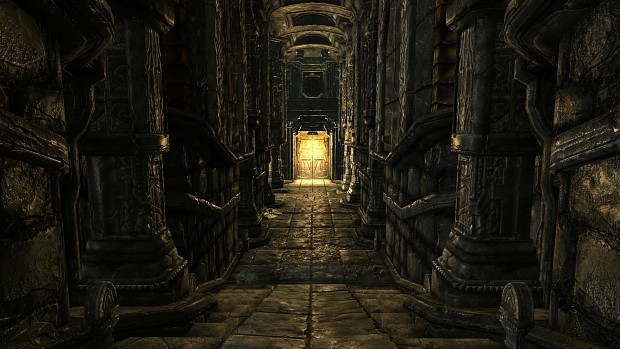 This is the 2nd part of a multi-post series on the Skyrim mod, “The Forgotten City”.

As before: there will be quite a few spoilers ahead. Turn around if you don’t want to read them.

In the last part, I warned you about the Dwarves’ Law. Well, I violated said law – intentionally – to show you what could happen (apologies for the sound quality):

Nothing good comes from going toe-to-toe with a Dwarven Centurion.

2. b) Talking to the People

There are at least 25 people in the Forgotten City that you can interact with. Some are more forthcoming than others. About half of them are in or around the Citadel. The rest are scattered throughout the City. A good chunk of the townspeople will go to the Tavern after 8 PM; if you don’t want to travel a lot, camp out in the Tavern. Or, you can explore the empty houses while their owners are drinking and eating. 😉

Here are the people that I talked to, the places I went, and some of the things I learned, on my quest to find out who activated the Dwarves’ Law:

Gaia (in the Citadel)

I first talked to Gaia before my visit to the Jarl. Over a couple of visits, I learned that:

Gaia has a room on the ground floor of the Citadel. She is friendly but committed to her research. Seems fairly innocent.

Safina (in the Citadel)

I also talked to Safina on the way to the Jarl:

Safina seems very afraid of Domitus. If you walk close to her, she always warns you that she can’t talk long because “Domitus will return soon.”

Miranda (outside the entrance to the City)

Miranda actually talks to you, once you talk to the Citadel; she starts the “Looters” event (see my last post about that event). After that’s taken care of:

Miranda offered the first good piece on important-sounding information. She, along with a griping Safina, both hinted at a possible racial segregation, between the Citadel-living (and not working) Imperials and the rest of the population (Redguards, Bretons, Dunmer, etc.).

Habiq (owner of the “Firefly Finery”)

Habiq can normally be found inside his clothing store:

Both Habiq and Miranda have one possible motive for doing something to activate the Dwarves’ Law: racism. They could attack someone… maybe someone in the Citadel?

Whoever wrote that note is, as of this conversation, the prime suspect, in my eye.

After talking to Vernon, I started walking around, looking in doors. Two people shooed me out. The 3rd house was unoccupied at that moment. The two big finds in Rastasia’s house:

With so many Imperials and Bretons running around, I don’t think that Rastasia would do something – like reveal that she’s Forsworn – that could trigger a response and trigger the Dwarves’ Law.

Another house that I came across was Brandas’s house. I found… a pair of Dwarven Immaculate Boots! I will have to talk to Gaia about those!

Being in the area, I then went to the Tavern.

The first person that I ran into is Rastasia, the person whose house I just searched.

Not much else of note came from Rastasia. Since the Tavern was empty at the time, I “waited” for a few hours. Once I wandered around for a bit, I went back to the Tavern.

Vitus (in the Tavern)

Sitting near the back of the room, I found Vitus:

I am not worrying too much about Vitus.

This caveman is wandering around town, in a set of Immaculate Dwarven Armor. He doesn’t say much; in fact, he is probably the most hostile character I’ve met, so far. What he did say, though, was important:

I would make him a prime suspect, but I think he might be an ally, if/when the Law is broken. Other than Vitus and Rastasia, Rykas seems like one of the few that could handle himself/herself in a fight, so far.

Ulrin was, in fact, at a table, drinking.

To me, it still feels like Ulrin is hiding something but I don’t know what.

It’s hard to not finger a Brotherhood member as a prime suspect. This could be a trap. We’ll see.

*Dooley (by the Lakehouse)

I also talked to a former Skooma addict and current Citadel cook (“Ashanshi”), and showed Gaia the Immacualte Boots. She didn’t respond… but Brol did, when I showed them to him. He stated that the Boots offered protection against the radiation in the Tunnels (well, THAT was new!), and wanted me to see what was down there.

I don’t have a way to get into the tunnels, yet.

Part III will begin with me talking to Domitus and maybe a character or 2 that I run into. After that I am going to work on most of those character quests (in no particular order):

I also haven’t looked into the Palace, yet. Part IV will deal with items such as the ramifications of the Jarl’s Quest and the other quests.

Next post should be up by the evening of 9/7!

3 thoughts on “Skyrim: ‘The Forgotten City’, The Return II”