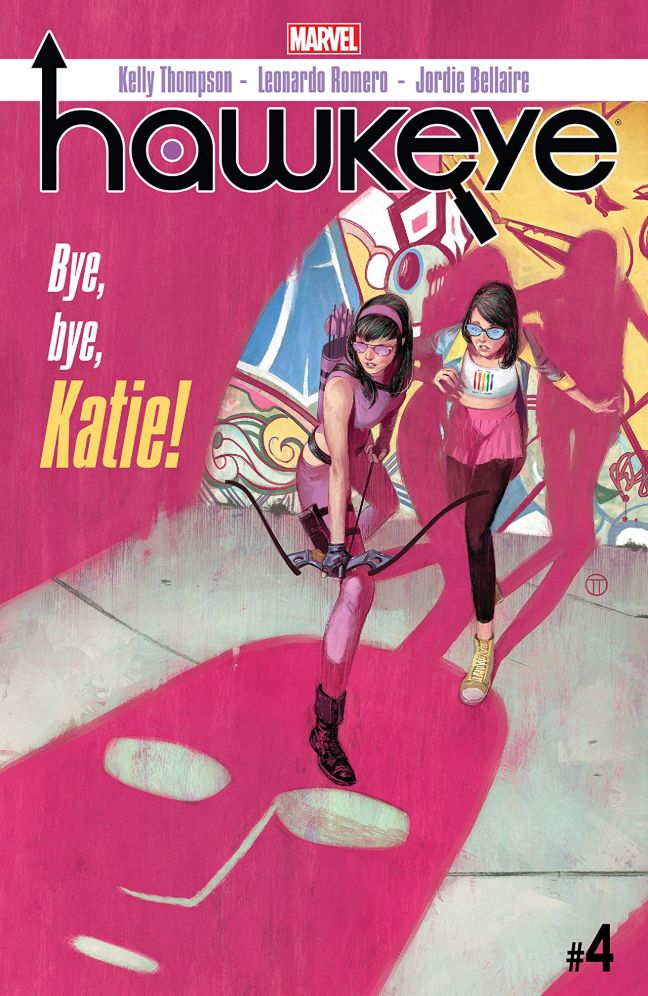 As the Junior Member of both “Comicdom Wrecks” and the spin-off podcast, “Podicus Wrecks”, I will occasionally get a comic to read, digest, and discuss on a future ‘Podicus’ episode. Hawkeye #1 was one of the comics we discussed. I liked the issue enough, J.R. (‘Podicus’ founder and co-host) let me read issues #2-#5 on my own – no timetable, no assignment-like discussion (although I can’t rule out an episode on them in the distant future).

“ I said you talk too much Homeboy you never shut up!”

Hall Of Fame rap group Run-DMC famously said those lyrics back in the 1980’s. Kate Bishop would have done well to heed those lyrics in Hawkeye #4. 😉

When we last saw our heroine, “Hawkeye” Kate Bishop was in the process of rescuing babbling college student and friend Mikka Nguyen from a spooky dungeon, when they both were spotted by a very Big Guy.

This issue picks up with Kate trying to talk the head off of Big Guy. “Big Guy” is at least 8-9 feet tall, heavily muscled, and wearing a hockey mask. And not wearing earplugs apparently, as he stops Kate’s incessant talking with a gigantic throw, sending a tied-up Kate splintering into a wall.

Kate, beaten up but free, counters with a “Bomby Pin”: an exploding Bobby Pin to Big Guy’s face. Kate and Mikka escape the dungeon and, with help from Ramona, Johnny, and Quinn, escape TBC’s building. While escaping, Ramona breaks Mikka out of her babbling state with a touching kiss.

All is not well, as Big Guy catches up with Kate and friends, and morphs into Huge Guy, also known as the Frat Guy from issue #3 – think “Hulk”, but not quite as ragey or near-immortally.

And not as green. He puts a pretty good beating on Kate, forcing her to run. She comes upon some music playing outside – the festival that Quinn couldn’t quite ask her out to – and, thinking about music curing the savage beast, leads Huge Guy to the music. The plan works: Huge Guy shrinks back to Big Guy and then back to Normal Sized Guy.

Kate and friends reunite as her office, with a touching moment where she realizes that the other 4 are her “anchor points” in L.A.

Kate heads to the Police HQ, runs into a still-annoyed Detective Rivera, and heads off to question the captured normal-sized Frat Guy. Frat Guy drops a line about how Kate’s Dad would react if he…

Frat Guy blows up! He explodes, mid-interview, into a pile of green goo!

Kate, after the police incident, is seen on the pier, contemplating/worrying about what Frat Guy’s words about her Dad meant. She was still thinking about that when she walked into her office….

… to see Jessica Jones standing by her desk, with “Brian” (from issue #1) in a chair.

This was a pretty good issue. I like that Kate tried to talk her way out of that dungeon and Big Guy was having absolutely none of it. The reunion of Ramona and Mikka was a sweet moment; the moment that Kate realized her “anchor points” was also a cool moment. This has been an enjoyable series!

One thought on “Review: Hawkeye #4”