There is a LOT of door-kickin’, back-stabbin’, and even some lolly-gaggin’ in the ridiculously fun board/card game, “Munchkin”. This was a new edition to our weekly Game Night, and my first time playing it (I’ve watched others play before)

The object of the game is to reach Level 10 with your character. You gain levels by defeating monsters or by drawing the correct Door Card.

There are 2 main decks of cards: Door Cards and Treasure

Treasure Cards are just what they seem: treasure! Everything from gold to weapons (mundane ones, like a Club, to ‘unique’ ones, like a Rat On A Stick) to armor can be found
in this deck. 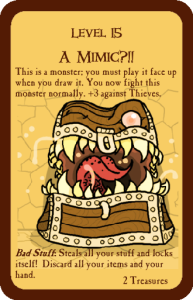 Door Cards progress the game: new Classes, Races, Curses (and there a re some amazing ones), Monsters (like that ridiculous Mimic pictured), and other treats are in the Door Card decks. You have been warned.

Each character starts at Level 1 – the bottom of the board (top picture). You are a Human with no Class (*snicker*); your sex is determined by you, unless a card changes it (it’s totally possible). You also start with 4 Treasure cards and 4 Door Cards.

You can’t really stay down there at Level 1 – where’s the fun in that?? – so you have to try and enter the next room. That’s where you “kick down the door” and do one of these things:

To gain levels, you must defeat Monsters. To defeat Monsters, your total combat strength must be greater than the Monster’s: combat strength is your Level + modifiers from your Items (positive and negative) + modifiers that are played on you. If it’s tied, you Run Away. But oh noooo, you won’t usually escape a Monster fight without… interference. Players can play Potions, Curses, even other Monsters on you, the Monster(s) you’re fighting, or both, to hinder you. Other players can join in to possibly help you and screw someone else. If your total is higher than the Monster, you defeat it and gain a level, plus some kind of reward (level and/or treasure). To get to Level 10, you have to kill a Monster; card modifiers or events cannot push you there. We had that scenario come up; one guy could have went to 10 with a card stipulation but it was denied; he didn’t kill anything to get there.

Here is a link to the complete set of rules, including Running From Fights and some variations on the Basic Rules:

This game goes by pretty quickly: maybe 60-75 minutes, 2 hours tops. It is extremely fun, especially when you get friends trying to out-cutthroat each other. I’m not on nearly the same level of treachery as the other 4 that played last Thursday were, but I did enjoy throwing in a cheap shot here and there.

The descriptions of the Weapons, Armor, and Curses are pretty cool; the Monsters aren’t far behind. Have you ever taken a Gentleman’s Club into battle against the Wight Brothers?

It is for 3-6 players, ages 10+, so be mindful of that fact. There are dozens of expansions and spin-offs to this game. If you want something as a quick “ice breaker” for a party, or something for a Game Night, where there’s very little setup and not many complicated rules, then Munchkin should be near the top of your lists.