It it the Halloween season, and one of the first ways to kick it off is through the MMORPG (Massively Multiplayer Online Roleplayer Game), World of Warcraft (“WoW”). The most recent expansion pack of WoW is called “Battle of Azeroth” (BfA), dealing with the re-ignited global war between the Alliance and the Horde, as well as each sides’ adventures in different lands, where they try to recruit new allies. It’s in one of the Alliance’s potential allies’ countries, called Kul Tiras, that the story of Abbey Lewis takes place.

Kul Tiris was a former member of the Alliance but broke away dozens of years before BfA takes place. Kul Tiris has its own set of problems before they will consider aiding the Alliance.

There are major spoilers ahead, although the story itself isn’t a huge part of the overall story line.

The character that I was playing with is a Level 120 Balance Druid.

On the way to one of the Kul Tiran towns, you travel through what can best be described as a haunted forest: dark skies, darker trees, and all manner of charmed and possessed wildlife that won’t hesitate to attack you… including rabbits. There is no indication as to what (or who) has charmed the forest animals. Inside this forest is an almost-abandoned little hamlet. I say ‘almost’ because there is a little girl there, skipping and singing through the center of the hamlet. This is Abby Lewis. And she is very creepy:

Abby is understandably lonely and her first request for you is to help her find some play mates:

So I’m now off on an adventure!

The “guests” that Abby wanted me to find were her stuffed toys: a stuffed bear, a stuffed elephant, and I don’t know for sure what Mr. Munchykins was. 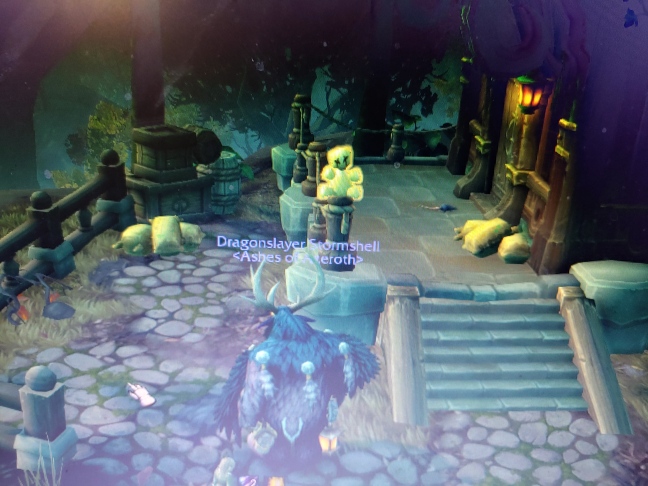 Once I found the 3 guests, she asked me to find her cat, Smoochums, the 4th guest. As I  started my search, I came across an old ledger of the town. According to the ledger, the town is known as Glenbrook. Glenbrook’s ledger opens up another quest: find out where 3 townsfolk are and what happened to them.

I followed my map’s prompts to each of the villagers. As I found out their fates, Abby would offer up a little rhyme in support.

If you consider “morbidly dark rhymes” as “supportive”.

After finding the cat, who ran off, I went looking for the villagers:

I then found the remains of Jonathan Hayes:

Finally, I found Mary Hayes… rather, a book that belonged to Mary:

“Miss Mary turned her back on us while seeking wicked power. She brought death upon our village, turned the forest dark and dour.”

So, Mary might have been (indirectly?) behind the witches and sacrifice that Abby mentioned before. Given the theme of this area of Kul Tiras, it fits. It still doesn’t explain Abby’s odd comments and behavior.

On the way back, I found a villager named Annie Hayes. Actually found her, not her remains. She was in a cave, was the person that I had to turn in the “The Village of Glenbrook” quest to, and she appeared very shaken.

You try to talk to Annie but her attention isn’t focused on you: 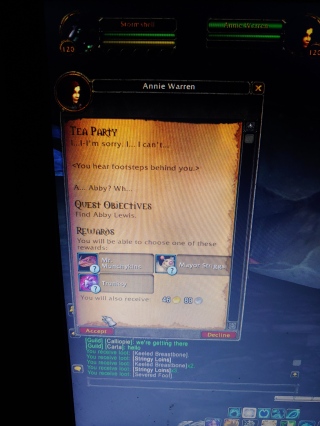 Abby insists that you follow her to a nearby house for the tea party. Annie will not follow you. I didn’t want to but I had to turn in the “Kitty” quest, so I warily followed her.

We arrived at… a small table, topped by a tea set. All 3 of the dolls are seated around the table. 3 seats were open; I took one, Abby took one, and Smoochums showed up. Abby then calls for the final guest:

Abby walks off, as he Abomination walks up, saying that I would not leave this tea party alive, her voice slightly changing at the end. This isn’t an easy fight but is pretty straightforward. It’s made easier by completing some quests beforehand that give you silver-coated weapons, which give you extra damage against witches and their creatures.

The village of Glenbrook wasn’t doomed because Mary sought dark powers; it was doomed because she (and Annie) refused them. Witches descended upon the town and either captured, killed, or possessed nearly every living being in it. I don’t know what part Abby played but she was apparently left behind as a trap for those who wandered by.

Returning to Annie, she wraps up this story:

This was a fun and spooky sub-story in the overarching Kul Tiris story in World of Warcraft. The theme of Witches (part of this section of the game) took an interesting turn in Glenbrook. I don’t know if or when I’ll run into Abby Lewis again; maybe she is part of another quest chain or a dungeon. I do know that, in perfect hindsight, I should have gutted Abby the moment I heard her singing. 😉

Hope you enjoyed it!