Interesting characters. Interesting mechanics. 5 Game Modes. “Tiny Epic Zombies” offers quite a bit to the gamer… just don’t assume that all of it will be easy.

Echo Ridge Mall is the setting; survival is the objective.

For our Game Night play-through, we had 4 players – me, J.R., Evan,, and Scotty – and played Co-Op with Game-Controlled Zombies Mode.

The next thing that hooked me was the physical size of the game: it is very portable. You could play it on a full-sized dining room table or on a living room coffee table.

The size of the board doesn’t detract from the missions of the game, however: Survivors must complete 3 missions to win the game; Zombies (game or player-controlled) win by either killing all of the survivors, taking control of the Echo Ridge Mall’s Courtyard, or forcing the players through the Search Card deck (more on that in a moment). 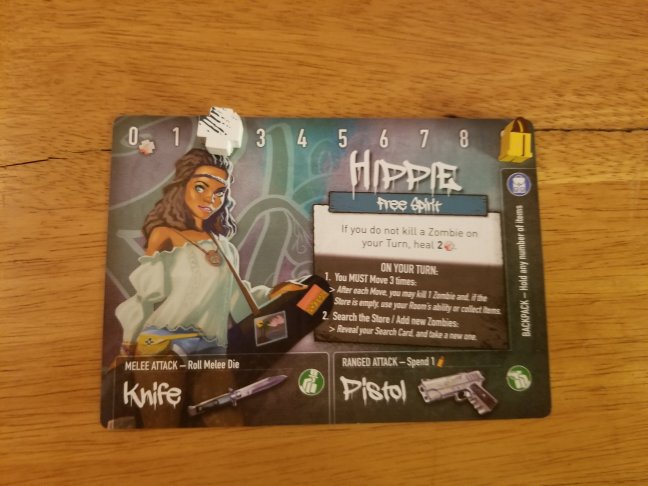 You start by choosing one of the available Character Cards. Each Character Card has a special ability listed, a refresher of the rules for the Players, and what melee and ranged weapon you start with. It also has a number track across the top: your HP Damage starts at ‘0’, while your Ammo starts at ‘9’. If your Damage ever gets at, or above, your Ammo, you die. Strange rule but I like it.

In Game 1, I was the ‘Hippie’: I started with a Knife and a Pistol, but tried not to use them: my ability was called “Free Spirit” – if I didn’t kill a Zombie on my turn, I automatically healed myself for 2 HP.

3 Objective Cards are placed to the side of the main play area. A Search Card is placed in front of each Player, face-down.

Each game tile has 3-4 spaces per tile; the Courtyard has a section for setting up Barricades to keep Zombies out, plus a walkway around it (which is a separate “space”).

Game play itself is simple. On their turn, each Survivor moves 3 times. Where you move determines what happens next. Move beside a Zombie, you’ll have to fight; move into a room next to a Zombie, you can shoot it. At the end of your 3 moves, if your room is free of Zombies, you can search the room. This is done by turning over that Search Card in front of you, then placing the card next to the room you found it in; you can’t use it until your next turn, but another player can come along and pick it up (and use it) immediately. That item could be an Ax… it could be Dynamite…. it could be a Zombie. Be forewarned.

You can combat Zombies in 2 ways: Melee or Ranged. Ranged seemed to be the simpler way: move to a room adjacent to a Zombie, spend 1 Ammo, and the Zombie is dead. No muss, no fuss.

Melee fights have a few more mechanics but they aren’t exactly soul-crushingly difficult. You roll a 6-sided die and take the results; the Zombie dies, regardless:

A side note on the Melee Die: it also comes into play with certain rooms. You’ll have to roll it, if a room or space calls for certain outcomes upon landing in or on it.

Fighting a Zombie is easy; where this game gets very hard is when Zombies start re-spawning. In rooms where Objective items lay. Or cutting you off from your teammates (especially if you are playing a Co-Op mode).

The above is the Game Board. The green figures are the Zombies. The Blue, Pink, Orange, and Grey figures are Meeples. Actually, they are “ITEMeeples”: you can actually attach weapons and items onto the Meeple! This is a really cool feature, to me: seeing my Meeple holding an actual ax is nice.

There are many things to like about “Tiny Epic Zombies”. The pace is pretty quick: 30 minutes is about average for a game. Game #1 for us was less than 10 minutes (that game spiraled out of control, quickly!); Game #2 was 30-40 minutes. There are plenty of characters to choose from, each with some interesting Special Abilities. The character I chose in the 2nd game had “Sugar Rush” whenever she was ‘overrun’ by Zombies, she could then move up to 3 spaces away. If in the right spot, she could go back to the Courtyard, where characters heal for 2 HP each time they enter it. 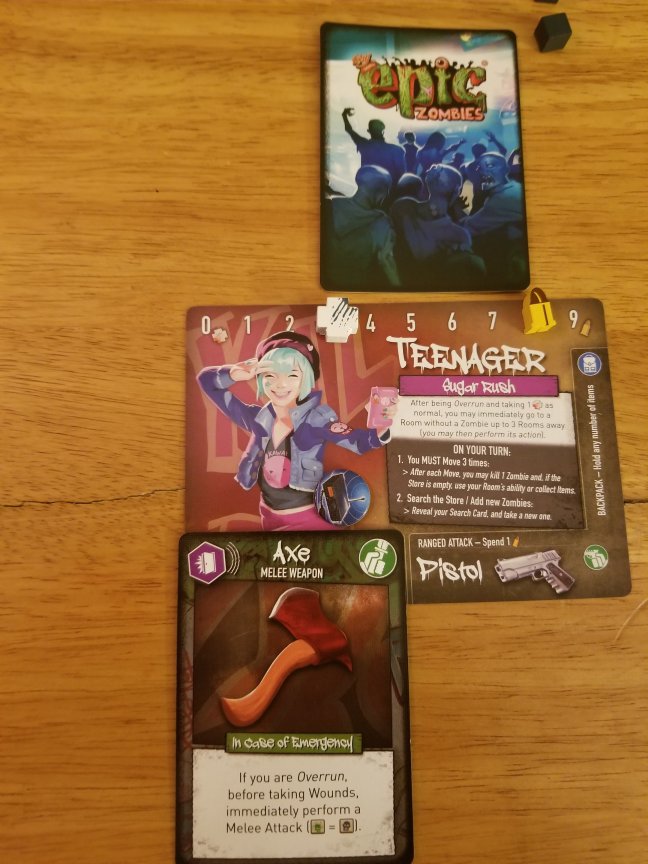 I didn’t like the layouts of the spaces of each tile. It wasn’t exactly easy to see where to move or how to move. This is a minor complaint, however.

For more info on rules and terminology, go to Gamelyn Games, read the descriptions, and watch the “How To Play” video!

This isn’t exactly for young kids; otherwise, pick up a copy or play at a house of a friend who already has it. This is a seriously fun, difficult, and quick game!