The University of Louisville Men’s Basketball team would sometimes hold special promotions before and after the games. One of those promotions was a Meet & Greet with the 1980 National Championship team, in 2005. Before our call time for Pep Band, a few of us went down to the side of the area (Freedom Hall) and got to chat with some of the team members and get various items signed. I got my Euphonium Soft Case autographed by most of the players and Hall Of Fame Coach Denny Crum! 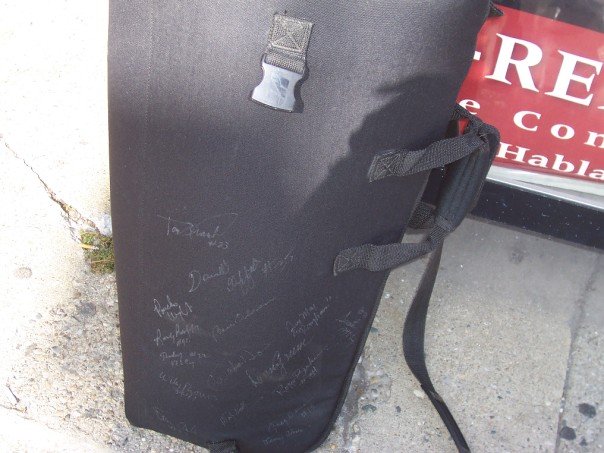 It was cool to meet a basketball team that meant so much to people in this area (I was only a year and a half old when they won the title) and the coach who was the face of UofL basketball for my entire childhood!

In 1999, I was working at Target. The general setup of the employees was:

I was the Home Office Specialist through October ’99. I was then promoted to the Specialist of Entertainment (Music, Movies, Books, and Software), reporting to the Electronics Team Lead; it was considered a “promotion” because I got a raise, Entertainment brought in much more foot traffic, and my work schedule now focused on Mondays (when New Releases came in), Tuesday mornings (when I would set them up and sign them on the shelves before the store opened), and Friday mornings (when I would work with various Book vendors, such as Levy and Harlequin). If you don’t mind a rare, little self-brag, the first year of my time in Entertainment (i might be a little off on the numbers below):

Puckett, the guy mentioned in this post, was co-Specialist with me from the end of 2001-March 2003, as I had enrolled at UofL in the Fall 2001 semester and couldn’t work Monday nights. He took over Music, the setting up and stocking of New Releases, I took control of Books and Software, and we split Movies.

This promotion stands out for me because it put me in a Department (Electronics) and an area (Entertainment) that I really liked and the pay raise helped out at home a lot.

In 5th Grade, a group of us went to a History Bowl: a competition where History, Geography, and related subjects were the subjects of questions asked to teams of 5. We would discuss the answers, then wrote our answers down on mini chalkboards (as I again date myself). There were (I think) 24 schools that competed. The judges emphasized that we couldn’t ask the audience or teammates not playing for answers and that their decisions were final. This is important because one question changed the course of the Finals.

We – St. Matthews Elementary – were one of the 3 teams in the Finals. One of the questions was: “What is the part of a river where it flows into another river or a larger body of water?” We said ‘mouth’, judges said ‘source’. The ruling stayed until someone – maybe our teacher, Mrs. Kissling, I don’t remember – appealed during a Break… and the judges overturned the ruling, after a lengthy explanation and apology. We went on to win the History Bowl. On the way back to St. Matthews, Mrs. Kissling had us pretend that we didn’t go too far in the tournament. With 10 over-excited 5th graders – it didn’t hold for long, especially when she brought the trophy from behind her back. 😉 It was a fun competition!

Another academic competition was Quick Recall. If there was any activity that could rival Band for “Favorite Subject or Activity”, Quick Recall was it, for me. Here is a definition: LINK

I played in Middle School and 10th-12th grades in High School, at Ballard. In my 12th Grade year, we found ourselves going head-to-head with Trinity High School, not only in Quick Recall but for the overarching Governor’s Cup Championships (which included Assessment Tests in different subjects; Future Problem Solvers, and, I think, Odyssey of the Mind, a Science competition). I think we beat Trinity in the Regular Season match up but I don’t remember the score. We also won the overall District Title in Governor’s Cup over them, but lost the Quick Recall District Title to them.

In the Regional Quick Recall Tournament, we met Trinity again. They jumped out to a big lead and were up as many as 20 points in the early second half. Mrs. Eschels, our Coach, called a Time Out and substituted me and another teammate in. We then went on a Run of the Ages: cut Trinity’s lead down to 3, with less than a minute left… but couldn’t get closer. We lost by 4 (a slight consolation was that Ballard won the overall Regional Title). What made this moment stand out was Trinity’s coach: after the match, while we’re all shaking hands and mingling, he came up to me and a couple of others and said [paraphrasing a little bit]: “Can we borrow you for State [Tournament]? You were their Good Luck Charm! Excellent match!” That was a very mixed-feeling moment: I didn’t answer many Single questions (just helped on the collaborative Bonus questions) – Matt, Jonathan, and Stephanie did the bulk of our scoring in that match, from what I remember – and didn’t exactly feel useful after the loss, but I really appreciated that compliment. Plus, those games against Trinity that year were intensely fun. But, that Good Luck Charm compliment stuck in mind and has been there for 22 years now.