This is the 6th and final part of a multi-post series on the Skyrim mod, “The Forgotten City”.

I was told by the scholar Brol that there had to be some kind of Judge that lived underground, pulling the strings of the Dwarves’ Law. This was indirectly corroborated by the now-deceased Brandas and his “something evil is down there” Final Words.

Off to the Underground Tunnels I go.

I entered the Tunnels not from my quarters or one of the other shops (see Part IV) but from the boarded up door near the Lake. Inside, there is a long, downward-sloping path; it makes a right hand turn and continues to slope down. At the bottom of this section, you find Liandris… or what’s left of him. By his body is an Immaculate Dwarven Helmet! the path branches to the right again, slopes down, and brings you to this: 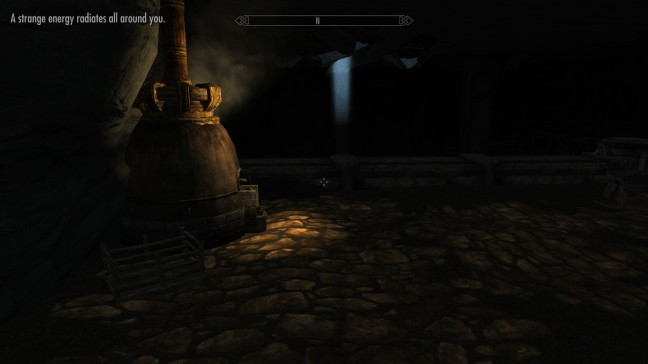 There is a Smelter on the right, a low wall in front, and the path to the right. Unless you have a FULL set of Immaculate Armor, your journey might end here. That warning at the top of the above picture? That energy will kill your character in under 7 seconds if you stay here, so RUN back up the path! If you have the Immaculate Armor Set, skip ahead to “Circling the Dome”.

Accusations and Getting the Immaculate Armor

After running from the Tunnels – with less than 1/4 bar of health – I returned to the City. I didn’t have the Immaculate Armor set… and only one person did:

I couldn’t attack him (that would trigger the Dwarves’ Law), but I needed his armor, so i decided on taking a chance: I went back to the Jarl and accused Rykas of breaking the Dwarves’ Law. I was hoping that the Jarl would want me to dispose of Rykas – somehow – and I was right. 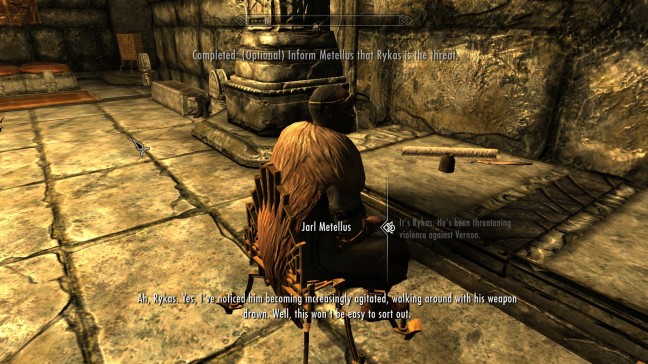 The Jarl proclaimed that “certain areas of the City are out of eyesight of the Dwarves’ Law”; he instructed me to lead Rykas underground and kill him, “for the good of us all”.

I went to Rykas, tricked him into following me, and went back to the Lake entrance to the Tunnels. Note: it can be in any set of underground tunnels. Once in the Tunnels, and out of eye sight, I attacked! It wasn’t particularly difficult – a Shout or 2 knocked Rykas off-balance long enough for me to finish him off. There was one “small” problem, however:

Return to the Past; Tunnels 2

After killing Rykas, make sure to loot his body. Leave the Tunnels; as you are approaching the entrance, there is an explosion and the ceiling behind you collapses! You now have to return to the Lakehouse, if you ever want to see what else is down there.

Go back to the Lakehouse – avoid any close Centurions! – and go back through the portal to the past. You can basically brush off Gulvar with the “we’ve done this before” comments. You can also skip going to the Jarl; I now have the full set of Immaculate Dwarven Armor (Gauntlets from the Palace; Boots from Brandas; helmet from Brandas’ body; Armor from Rykas), so I can go straight to the Tunnels.

Go back to the Tunnels and go down the path, back to the Smelter area. Now that radiation isn’t killing you quickly, take a look around: you are in a gigantic cavern. On the other side of the short wall in front of you, there is a larger dome in the floor of the cavern, surrounded by loose boulders and outgrowths of stone. The path goes to your right – head that way. This is a long path, now circling gradually to the left and still sloping downwards, just not quite as steeply. As you make your way around the path, you’ll see blue glowing stones littered on the floor and in the walls; they cannot be looted. Perhaps they are the source of the radiation?

You will encounter the remains of Dwarven Spiders on the path. They are a good source of random Dwemer metal and scrap, if you hae the room to carry them. Also along the path, you will get attacked by “Magic Anomalies”: blue, fireball-shaped entities. If you have encountered “Will O’ Wisps” in this game or Elder Scrolls IV: Oblivion before, they move and act very similar to them. Arrows are not a good idea: too many chances to miss. Spells are effective but (enchanted) melee weapons might be the best option. 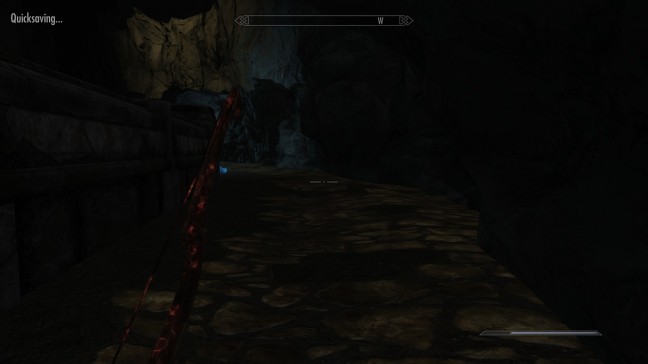 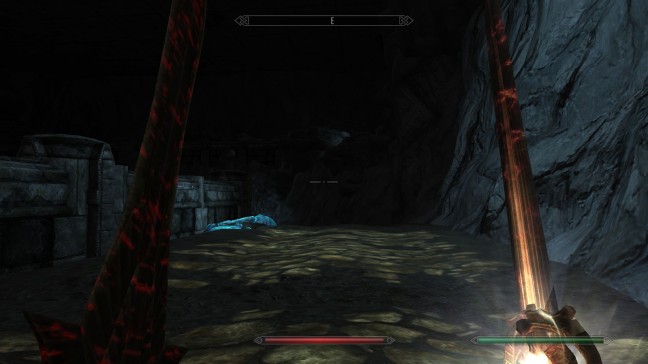 The Dome; The Arbiter; More Accusations

After what feels like an eternity walking this path, you finally come to the bottom of the cavern floor… and a door leading into the rocks:

You are now inside the Dome that you saw at the top of the path. And there is a door at the end of a short hallway. An eerie hallway.

I won’t reveal everything he tells you, but I will reveal 2 things: 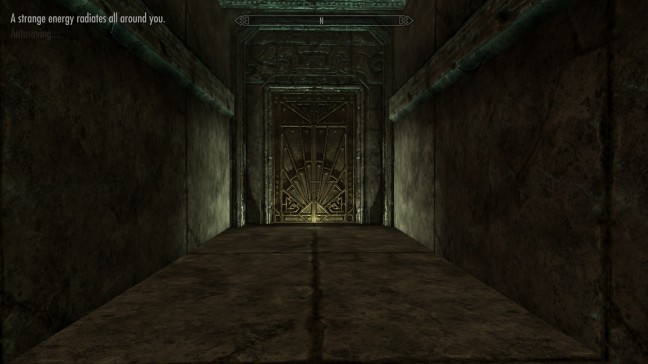 Inside is a small chamber, with a spiral ramp around the room. There are some strange, lavender-and-silver-glowing crystals growing from the floor. Above the crystals, inside of a golden shield is …

The Arbiter has a conversation with you, knowing who you are, what you are, and from when you came. He also chides you for earlier game choices:

You can progress the conversation with The Arbiter. I won’t reveal everything he tells you, but I will reveal 2 things:

He is a Dwemer. 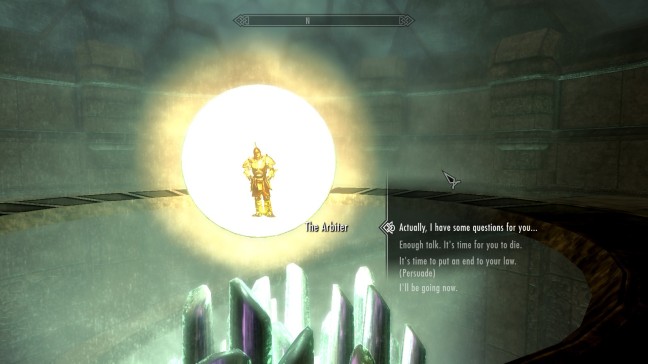 He is not particularly impressed by you or your questions. In fact, he might act disgusted by you… and attacks! He is heavy into spells, especially Stamina and Life Drains. I am heavy into Shouts and bows (and swords, when needed for “close encounters”). Whatever your choice, defeat The Arbiter. It will not be an easy fight for some. Loot his Helmet. You will need it later.

When The Arbiter is defeated, the whole underground cavern starts shaking and the “Dwarves’ Law Music” plays. Run out of the Dome, back up the Path, and out of the Tunnels. Head to the Lakehouse and enter the past again.

Repeat the Tunnels-Path-Dome route, enter the Dome again, and talk to The Arbiter again. This time, when he’s calling you all kinds of bad names, show him his Helmet. It does a number on a person’s psyche when you show them a personal object and tell them that they basically beat it off of them. The Arbiter is no exception:

A combination of seeing his own helmet and some persuasive asking/talking about stopping the Dwarves’ Law results in a moment of crisis for The Arbiter. He ultimately chooses to stop enforcing the Dwarves’ Law. There is a blinding flash of light…

… and you wake up in a darker, empty cavern. Altrius – you know, the guy you came in here for, in the first place – is standing next to a statue-on-a-pedestal, clearly confused by your sudden appearance: 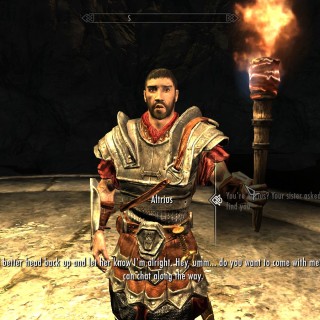 Jarl Gulvar?!? Now I feel bad for accusing you earlier…!

Gulvar… er, Jarl Gulvar… greets you warmly. So do the majority of the residents. Gulvar explains that Jarl Metellus was overthrown – violently – and he was named Jarl. He says that you will always be welcomed in the Forgotten City. 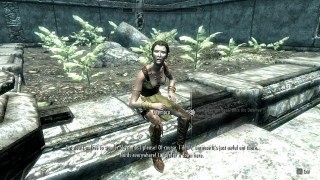 Once you leave the city, you come to where there used to be a pool in the old Ruins; instead, there is a lift. Activating it takes you up to Cassia. She is equal parts thrilled to see her brother, irritated that her brother scared her nearly to death, and glad to see you. She gifts you with a Necklace of the Silver Tongue, greatly increasing your Speechcraft and Persuasion. As you leave, you notice a journal on the podium next to Cassia: 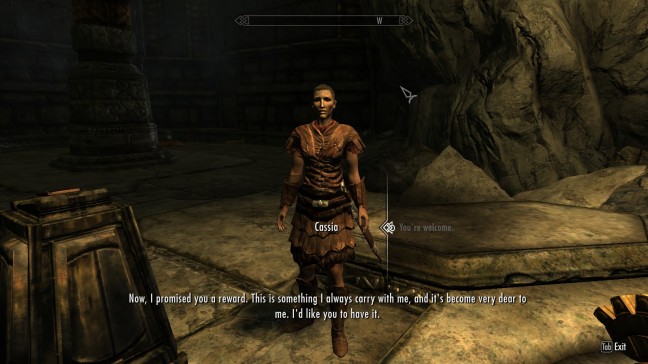 I absolutely enjoyed going back to The Forgotten City and doing a more in-depth analysis of the place. The methods and choices that I wrote about, over the last 2 weeks, are just some of the available options – they are not necessarily the best choices or the most recommended choices; they were just the ones that I decided to make.

I hope you enjoyed my walk-through of “The Forgotten City”! I hope to write a few more of these lengthier reviews/walk-throughs in the future, with a little more polish and refining! See you in Skyrim!

6 thoughts on “Skyrim: “The Forgotten City”, The Return VI”